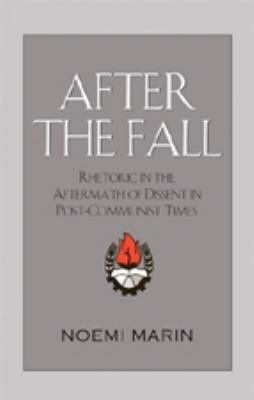 After the Fall Book Details:

After the Fall Book Summary/Review:

Noemi Marin analyzes famous writers from the area as critical intellectuals and exiles in order to explore the role of rhetoric and identity in writers' own experiences during the long history of communism. Along with examinations of discursive relationships among power, culture and resistance in works by George Konrad, Andrei Codrescu, and Siavenka Drakulic before and after the fall of communism, Marin proposes specific dimensions for a rhetoric of exile pertinent to communist Eastern and Central Europe. After the Fall shows how critical works on identity, culture, and communist history by the writers studied aid in reconstituting a rhetoric of dissidence, identity, and legitimation in the public discourse of a changing Europe. The book offers a unique perspective on the complex contexts of political transition, in which competing public discourse on freedom and democracy intersect with totalitarian regimes, unsettled societies, and issues of resistance.