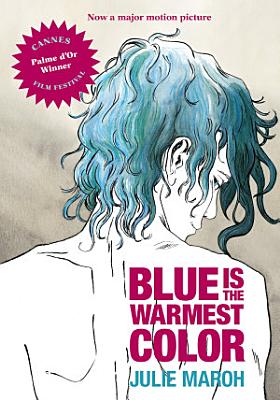 A New York Times bestseller The original graphic novel adapted into the film Blue Is the Warmest Color, winner of the Palme d'Or at the 2013 Cannes Film Festival In this tender, bittersweet, full-color graphic novel, a young woman named Clementine discovers herself and the elusive magic of love when she meets a confident blue-haired girl named Emma: a lesbian love story for the ages that bristles with the energy of youth and rebellion and the eternal light of desire. First published in France by Glénat, the book has won several awards, including the Audience Prize at the Angoulême International Comics Festival, Europe's largest. The live-action, French-language film version of the book, entitled Blue Is the Warmest Color, won the Palme d'Or at the Cannes Film Festival in May 2013. Directed by director Abdellatif Kechiche and starring Lea Seydoux and Adele Exarchopoulos, the film generated both wide praise and controversy. It will be released in the US through Sundance Selects/IFC Films. Julie Maroh is an author and illustrator originally from northern France. "Julie Maroh, who was just 19 when she started the comic, manages to convey the excitement, terror, and obsession of young love—and to show how wildly teenagers swing from one extreme emotion to the next ... Ultimately, Blue Is the Warmest Color is a sad story about loss and heartbreak, but while Emma and Clementine’s love lasts, it’s exhilarating and sustaining." —Slate.com "A beautiful, moving graphic novel." —Wall Street Journal "Blue Is the Warmest Color captures the entire life of a relationship in affecting and honest style." —Comics Worth Reading "Delicate linework conveys wordless longing in this graphic novel about a lesbian relationship." —New York Times Book Review (Editor's Choice) "A tragic yet beautifully wrought graphic novel." —Salon.com "Love is a beautiful punishment in Maroh’s paean to confusion, passion, and discovery ... An elegantly impassioned love story." —Publishers Weekly (STARRED REVIEW) "A lovely and wholehearted coming-out story ... the illustrations are infused with genuine, raw feeling. Wide-eyed Clementine wears every emotion on her sleeve, and teens will understand her journey perfectly." —Kirkus Reviews "The electric emotions of falling in love and the difficult process of self-acceptance will resonate with all readers ... Maroh’s use of color is deliberate enough to be eye-catching in a world of grey tones, with Emma’s bright blue hair capturing Clementine’s imagination, but is used sparingly enough that it supports and blends naturally with the story." —Library Journal (STARRED REVIEW) "It's not just the French who have a better handle on sexy material than Americans -- Canadians do, too ... Who's publishing it? Not an American publishing house but by Arsenal Pulp Press, a Canadian independent." —Los Angeles Times