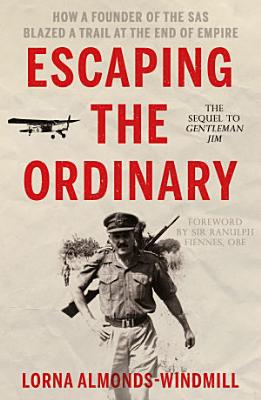 “Gentleman Jim is a special forces hero – and he is one of mine too." Sir Ranulph Fiennes, OBE The trailblazing sequel to Gentleman Jim: The Wartime Story of a Founder of the SAS. Following his death-defying Second World War, Gentleman Jim Almonds would never settle to an ordinary job. The SAS was disbanded but as a thirty-year-old Captain, he still hungered for adventure. After training Emperor Hailie Selassie’s Army in Ethiopia, he went as Second-in-Command of a bandit-chasing outfit in the new ‘Wild West’ of Eritrea. He was on active service in so-called peacetime. Atrocities and killings were common, but British justice was swift during a race against time as Almonds brought terrorism under control before the implementation of a United Nations decision to federate Eritrea with Ethiopia. Meanwhile, he embarked on personal adventuring and exploration alone in the wilds, rivers and highlands of Ethiopia, sometimes coming close to death. He was still the great escaper. The SAS reformed in Malaya and Almonds ran straight to the battle again. Back with the Regiment, he parachuted into the jungle to clear communist terrorists out of Malaya. In the early days of the Malayan Emergency, he improvised insertion techniques, close quarter combat training and led the long slow marches out. The success of this British campaign has been largely unsung – until now. In Singapore, Almonds took time out to design and hand-build boats in which he and his family sailed around the Straits of Johor. Another opportunity took him to the Gold Coast as a Major in the West African Frontier Force. He witnessed Independence as the British Union Flag was lowered and Ghana was created. He built a riverboat and navigated the mighty Volta River, before it was dammed, through dense equatorial jungle from Yeji to the sea. He even built, by hand (no power tools), a thirty-foot ocean-going ketch – designed and memorized whilst in an Italian Prisoner of War camp. He sailed out into the mid-Atlantic and home to England. He had no modern steering aids, no health and safety and no radio – yet an uncanny sense of direction. In the dog days of Empire, the story captures the snapshot detail of the many countries he visited during his three-month intercontinental voyage. The account is set in a meticulously researched context, fully sourced and contains a comprehensive index, maps and glossaries.