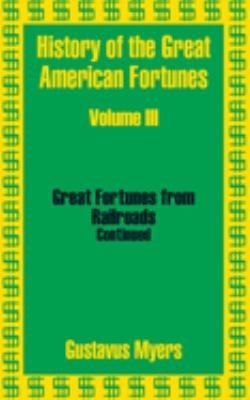 Originally published in 1910, a primary source for the business and development of American power in the nineteenth century. As Myers describes in his preface, it was the fashion in the early twentieth century to write of the multi-millionaires in an unfavorable light, as if they were all robber barons and had no social conscience. In his history he was attempting to be more realistic in his perspective. Volume one tells of the colonization of America and the large land grants and the great land fortunes. Volumes two and three cover the great fortunes from railroads, with extensive material on J. P. Morgan in relation to that category. Gustavus Myers (1872-1942) was an American historian who worked on a number of newspapers and magazines in New York City, joined the Populist party and the Social Reform Club, and was a member (1907-12) of the Socialist party. Such books as The History of Tammany Hall (1901), History of the Great American Fortunes (1910), and History of the Supreme Court of the United States (1912) were detailed, realistic exposes through which Myers made his reputation in the muckraking era of American literature.