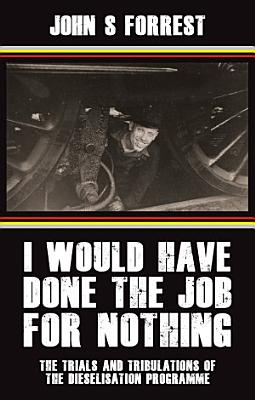 I Would Have Done the Job for Nothing Book Details:

I Would Have Done the Job for Nothing Book Summary/Review:

An entertaining railway memoir covering the Diesel modernisation.Aspects of railway and locomotive operations are explained clearly with detailed examples.Will appeal to readers with a specialised interest in Railway technology, engineering and history. I Would Have Done the Job for Nothing is a fly on the wall account detailing behind the scenes events of running a railway, including the odd occasion when the fly got swatted. It covers life in a busy locomotive works at Crewe during the age of steam and how the authors’ career developed and led to his moving from the Wirral to the East Midlands to work in the Derby Locomotive Drawing Office. He later transferred to the Headquarters at Derby just as the Diesel rail car modernisation began. Working for this new team they identified and resolved many issues of the new diesel locomotives. Many of the facts within this book may never have been told first hand, and although some were almost hilarious, others could have been far more serious and ultimately dangerous to the public if they have not been dealt with. The book aims to detail the attraction of engineering and the highs and lows of the job itself. It will appeal to readers with a specialised interest in locomotives, railway engineering and history.