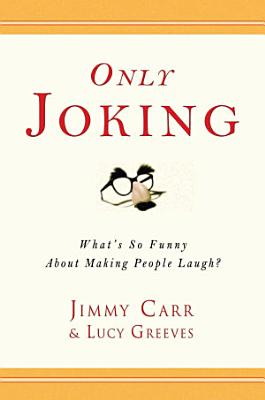 Britain’s hottest young comedian presents a seriously funny, up-close look at joking matters—from the social origins of laughter, to the art and craft of humor, to why we can never remember the punch line—featuring over 300 jokes. As the host of the hit game show Distraction (now in its third season on Comedy Central) and one of the premier stand-up acts working today, award-winning comedian Jimmy Carr has won over millions of fans around the world with his trademark rapier wit, laced with "exquisitely economical and perfectly timed one-liners" (The Guardian). For this book he teams up with friend and fellow comedy writer Lucy Greeves to take an in-depth look at where humor comes from and how it works, through exploring its purest form: the joke. Only Joking begins with the mechanism of laughter—how it happens and why even infants do it—then delves into the power of the punch line, exploring the basics of all jokes, from the use of shock and surprise to advanced stand-up techniques such as the "pull-back/reveal." Carr and Greeves go on to explore taboo humor, jokes that bomb, and the psychology of finding something funny. They look into the long-standing connection between politics and humor, and discuss the survival prospects for contentious jokes in the current political climate. Throughout the book they conjure up a supporting cast of colorful joke enthusiasts, from Sigmund Freud to Lenny Bruce, and discuss their influence on the jokes we tell today. Surveying across national, ethnic, and gender divides, this rollicking analysis of why joking will always be close to the human heart is an irresistible exploration of humor that makes clear why we need a good laugh now more than ever.