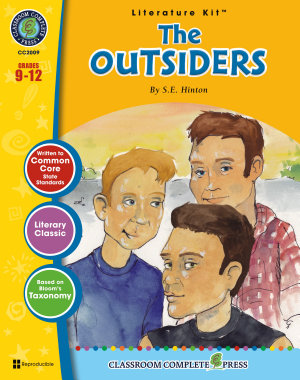 Delve deep into a world of socioeconomic differences and the tragic outcome of this conflict. A variety of activities keep students on their toes and practicing reading skills. Explore the themes of prejudice and social conventions and the part they play in a community. Explain Johnny's transformation through the eyes of Ponyboy. Answer multiple choice questions about Johnny and Ponyboy's time in the church. Match difficult vocabulary words to their meanings. Imagine interviewing Ponyboy about his actions while saving the trapped kids in the burning church. Explain how Cherry describes the duality of Bob. Imagine an alternate version of the story from the point of view of the Socs in which it was one of the Greasers who were killed in the fight. Aligned to your State Standards and written to Bloom's Taxonomy, additional crossword, word search, comprehension quiz and answer key are also included. About the Novel: The Outsiders is the classic coming-of-age story about two social groups in 1960s Oklahoma. The Greasers and the Socs are rival social groups, who engage in petty fights around town. Ponyboy and his friends are Greasers and get jumped by the Socs regularly. One night, after leaving a local drive-in, Ponyboy and his friend Johnny get jumped from a group of Socs who have a score to settle. Things go too far and one of the Socs gets killed. Ponyboy and Johnny now find themselves running from the police. After a week hiding out, the pair decide to return and face the consequences of their actions. Things go from bad to worse as the story faces its climax with a final rumble between the Greasers and the Socs.