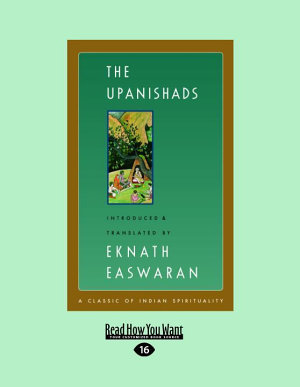 The Upanishads: one of three new editions of the books in Eknath Easwaran's Classics of Indian Spirituality series You are what your deep driving desire is. As your desire is, so is your will. As your will is, so is your deed. As your deed is, so is your destiny. - Brihadaranyaka Upanishad (IV.4.5) Over two thousand years ago, the sages of India embarked on an extraordinary experiment. While others were exploring the external world, they turned inward - to explore consciousness itself. In the changing flow of human thought, they asked, is there anything that remains the same? They found that there is indeed a changeless Reality underlying the ebb and flow of life. Their discoveries are an expression of what Aldous Huxley called the Perennial Philosophy, the wellspring of all religious faith that assures us that God-realization is within human reach. The Upanishads are the sages' wisdom, given in intense sessions of spiritual instruction in ashrams, in family gatherings, in a royal court, in the kingdom of Death himself. And Easwaran shows how these teachings are just as relevant to us now as they ever were centuries ago.