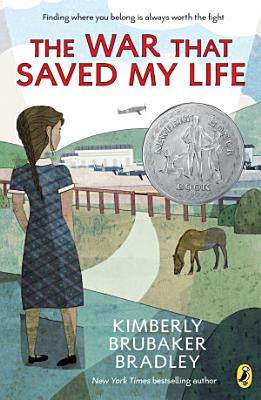 The War that Saved My Life Book Details:

The War that Saved My Life Book Summary/Review:

* Newbery Honor Book * #1 New York Times Bestseller * Winner of the Schneider Family Book Award * Wall Street Journal Best Children's Books of the Year * New York Public Library's 100 Books for Reading and Sharing An exceptionally moving story of triumph against all odds set during World War II, from the acclaimed author of Fighting Words, and for fans of Fish in a Tree and Number the Stars. Ten-year-old Ada has never left her one-room apartment. Her mother is too humiliated by Ada’s twisted foot to let her outside. So when her little brother Jamie is shipped out of London to escape the war, Ada doesn’t waste a minute—she sneaks out to join him. So begins a new adventure for Ada, and for Susan Smith, the woman who is forced to take the two kids in. As Ada teaches herself to ride a pony, learns to read, and watches for German spies, she begins to trust Susan—and Susan begins to love Ada and Jamie. But in the end, will their bond be enough to hold them together through wartime? Or will Ada and her brother fall back into the cruel hands of their mother? This masterful work of historical fiction is equal parts adventure and a moving tale of family and identity—a classic in the making. "Achingly lovely...Nuanced and emotionally acute."—The Wall Street Journal "Unforgettable...unflinching."—Common Sense Media ★ “Brisk and honest...Cause for celebration.” —Kirkus, starred review ★ "Poignant."—Publishers Weekly, starred review ★ "Powerful."—The Horn Book, starred review "Affecting."—Booklist "Emotionally satisfying...[A] page-turner."—BCCB “Exquisitely written...Heart-lifting.” —SLJ "Astounding...This book is remarkable."—Karen Cushman, author The Midwife's Apprentice "Beautifully told."—Patricia MacLachlan, author of Sarah, Plain and Tall "I read this novel in two big gulps."—Gary D. Schmidt, author of Okay for Now "I love Ada's bold heart...Her story's riveting."—Sheila Turnage, author of Three Times Lucky